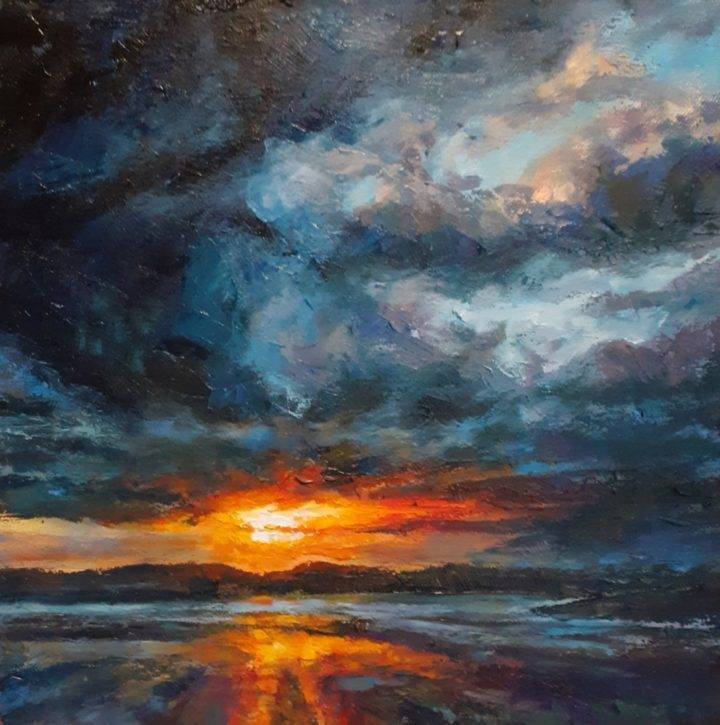 A short holiday at Abersoch during April 2017 and a visit to Plas Glyn-y-Weddw inspired Rob who lives at Wimslow, Cheshire to begin a series of four paintings featuring sunrises.

He has been exhibiting work in galleries and church spaces for over ten years and has accepted commissions from churches and cathedrals as well as for portraits.

Between 2012 and 2014 he painted a Stations of the Cross cycle for Manchester cathedral, consisting of eighteen life sized canvases and one drawing. In 2016 he completed the Stations of the Resurrection cycle for Liverpool Anglican cathedral, consisting of seventeen life sized canvases which are now part of the respective cathedral’s permanent art collections.

In 2015 his ‘Self Portrait Facing ‘Artist’s Block’’ won the Gordon Hulson Memorial Prize at the Royal Society of British Artists Open Exhibition.

Sitters for portraits have included The Rt Rev. Mark Davies, Bishop of Middleton and the writer and philosopher Colin Wilson.

He recently (2017) concluded a successful solo exhibition of work, consisting largely of skyscapes at the Well House Gallery in Horndon-on-the-Hill, Essex