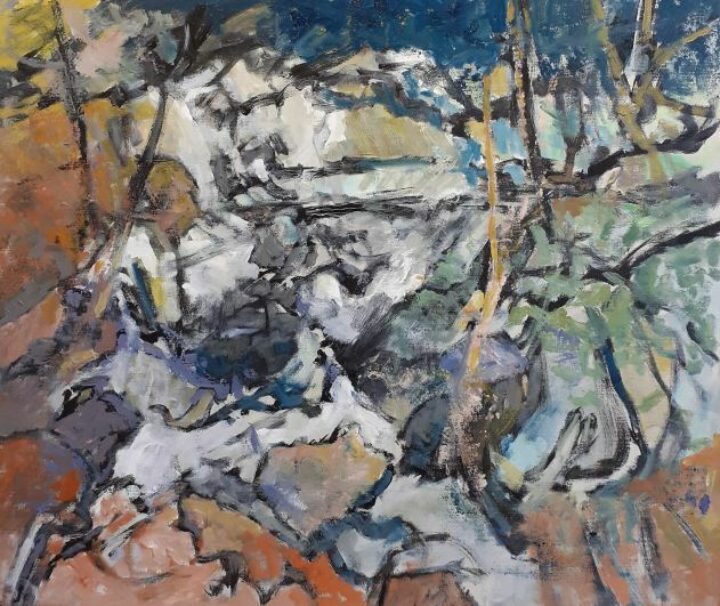 Born in Cardiff Howard Coles studied art at Cardiff College of Art, breaking his studies for a period of National Service in the Royal Navy. During a career concentrated on education he spent time living in Singapore, teaching at the Alexander Grammar School. It was here that he became interested in Malay woodcuts with their pared down images that were able to convey gesture and feeling. On returning to the UK he taught at Rufford Comprehensive in Kirby, on the Wirral before becoming Head of Art and Design at Hope University Liverpool.

For Howard painting is not about holding a mirror to the landscape or attempting some literal translation of the way it appears. What galvanises his energies, technique, skill and thought processes are his initial reactions to something seen uniquely for the first time. From the outset his aim is to see something different in the familiar and be so fired by that new experience that it elicits a creative response.

While that intent might be shared with photography, the two art forms require two entirely separate mind-sets. There is commonality in the ‘looking’ - both with the eye and through the cameral lens – but what sets the artist apart is the ‘seeing’. His is not a mirror image approach but an ability to penetrate to the real substance of the subject, to stare rather than a glancing acceptance that the landscape exists as wonderful picture making subject matter.

The germ of the idea exists in this staring point. What direction it will lead is not likely to be clarified until well into the painting where a combination of colour and gesture can take it to a number of different conclusions, which Howard says that in the main, he is happy to go along with. If the painting doesn’t throw up some element of ‘surprise’ in its progress he tends to gets suspicious, testifying to his emotional response from the initial ‘seeing’ through to the finished work.

For Howard “landscape is that complicated forging of the substance of the land itself together with transient events wrought by atmosphere and emotion. An awareness of the extent of how past cataclysmic upheavals have shaped the coastal landscape of Wales will often determine the physical act of committing paint to canvas.

Conveying this transience is the difficult part of the equation - the physical elements of rock and movement rely on skills honed through sculpture and printmaking, and their conversion of colour and gesture. The emotional response brought about by light and atmosphere is something that lies deep and private within the psyche. This calls for something from within as much as for experiment with palette and brush. It is not until all these elements are brought together that the artistic integrity of the painting, as well as the artist, has been maintained.”