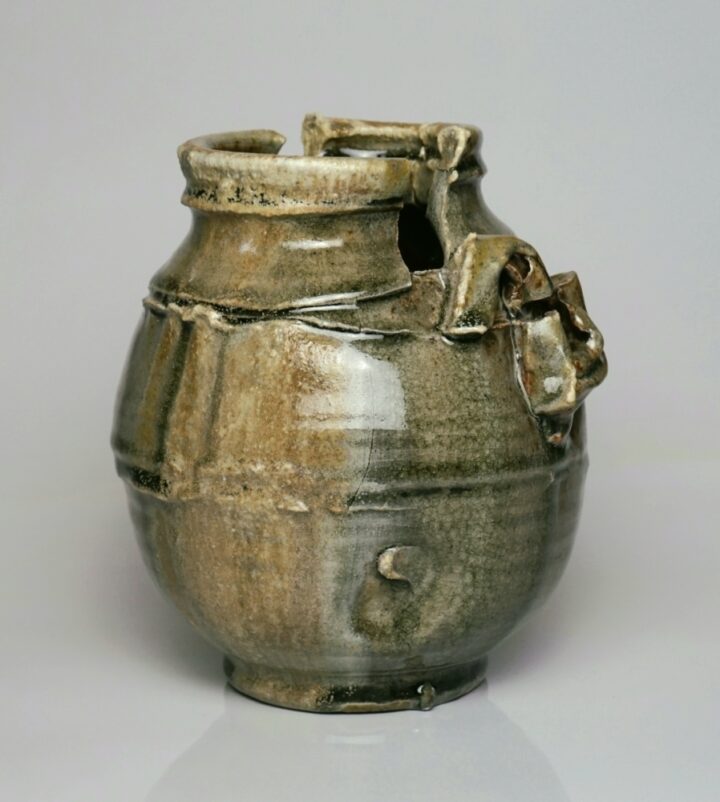 Based in Dolgellau, ceramicist and sculptor Elin Hughes creates vessels derived from an eclectic range of pottery traditions. She uses traditional techniques including throwing on the potter’s wheel and wood firing to create sculptural vessels that explore ideas around identity, flux, control, and the role of skill in today’s society.

Elin Hughes’ first solo exhibition ‘On Earth a Little Space’ brings together a new series of abstract vessels transmuted through fire, a mischievous reimagining of British country pottery traditions. Juxtaposing the traditional method of throwing on the potter’s wheel with unselfconscious improvisation, Elin creates forms caught in digital glitches between familiarity and uncertainty.

Cracked, pierced, and encrusted with wood ash, these vessels blur the boundaries between inside and outside space. As a result, they draw attention to the universal unifying nature of space between atoms, between other humans and between galaxies.

Many of these pieces were fired at the Oxford Anagama Project in an ancient style of Japanese tunnel kiln. The kiln is fuelled by wood and takes three days to fire, an arduous and highly technical process during which volunteers work in shifts day and night. The resulting colours are the outcome of interactions between iron, copper and carbon which are essential elements to the survival of all life forms on earth.